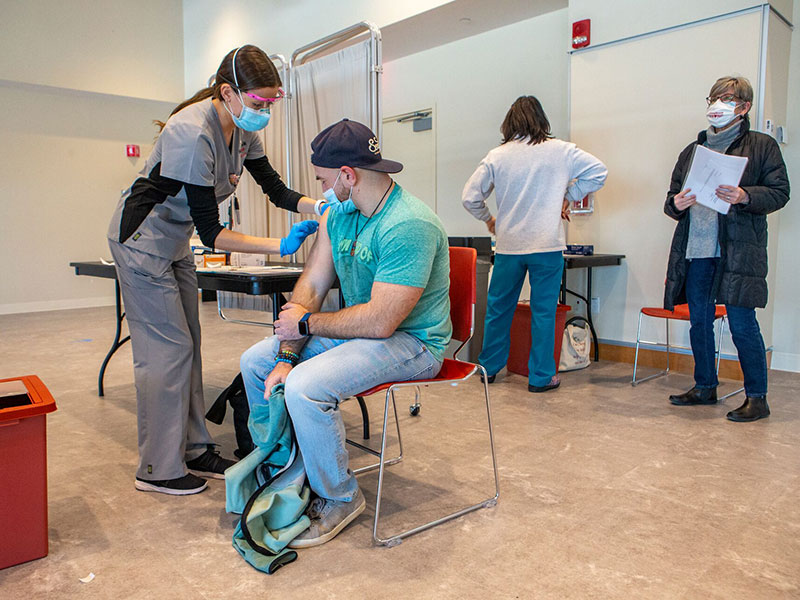 Because Stony Brook Medicine’s rollout of the vaccine went well, the State of New York gave the hospital additional vaccines and a mandate: “To go out into the community – and vaccinate,” said Dr. Kenneth Kaushansky, who until recently served as dean of Stony Brook’s Renaissance School of Medicine and senior vice president of health sciences.

The hospital set up what it calls “PODs,” or points of distribution, across Long Island to bring the vaccine to communities that needed it the most. These pop-up sites – in Wyandanch, Huntington Station, Islip, Brentwood, Patchogue, Southampton, Riverhead, Long Beach and Uniondale, to name a few – were run by the state but staffed by Stony Brook doctors, nurses and nursing students. Since the beginning of 2021, Stony Brook Medicine has administered more than 350,000 vaccines in more than 36 pop-up sites.

“Not everybody can come to Stony Brook University to get their vaccine, which is why sending PODs out into the communities is so important,” Kaushansky said at the time.

He credited his colleagues – Dr. Carol Gomes, CEO of Stony Brook University Hospital, and Dr. Margaret McGovern, vice president for the health system’s clinical programs and strategy and the medical school’s Dean for Clinical Affairs – for the efficient distribution of the vaccine both at the hospital and in communities across Long Island.

McGovern, who oversees the community PODs, explained the process, which starts with a team that scouts locations. “We have teams that pull the relationships in the community to pick out appropriate sites where they’ll be successful,” she said.

They also worked with leaders of cultural and religious organizations for help with outreach, which McGovern said “has been very helpful in getting that trust factor that people will come and get vaccinated. Some of those partners have actually helped us schedule the people so they do their outreach and that’s been incredibly helpful.”

Jill Agostino, a senior nursing student in Stony Brook’s accelerated bachelor’s program, was one of the vaccinators who traveled to various PODs.

“In Patchogue, it was in a big church where we were giving vaccines,” she said, referring to the Congregational Church of Patchogue. “And the pastor, when they realized we had some extra doses … he was calling some of his parishioners and was able to get some of them in.”

Agostino, who lives in Huntington Station with her husband, decided to go back to school for a second career in nursing when she was almost 57 years old. She left a 24-year career at the New York Times – most recently as the deputy editor of special sections – to enter Stony Brook’s rigorous one-year nursing program. She wanted to join the front lines in the battle against the virus.

But distributing the vaccine in these communities isn’t enough. Health care providers are realizing that making the vaccine accessible doesn’t address the greater issue. The statistics appear to support this.

According to the Centers for Disease Control and Prevention, only 30.5 percent of Black/Non-Hispanic Americans are fully vaccinated. Among Asians, 42 percent are fully inoculated and in the Hispanic/Latino population 36.8 percent have the full protection of a COVID vaccine.

In Suffolk County, as of mid-September, only 6.8 percent of African Americans have received at least one dose of a vaccine, according to the New York State vaccine tracker. The numbers for Asians in Suffolk County is even lower – only 5.8 percent have taken one shot – while in the Hispanic community that number rises to 21.3 percent.

In an effort to explore the topic, Stony Brook University Hospital focused its 5th annual medical ethics symposium on disparities in health care during the COVID-19 pandemic. One of the speakers, Dr. Hector Alcalá, assistant professor in the Department of Family, Population and Preventive Medicine Program in Public Health, defined health disparities as “differences in health linked to social or economic disadvantage.” He used COVID-19 testing as an example to explain why it’s important to care about these disparities.

While COVID testing is by and large free, “it may not be readily physically available in the space near you,” Alcalá said. The disparity isn’t resolved because testing is free, he pointed out, and just because it’s free doesn’t mean it’s accessible.

The same logic applies to COVID-19 vaccines, which is why Kaushansky said it’s important that Stony Brook went out into underserved communities to administer vaccines.

The pandemic’s toll on minorities has been well documented – the Mayo Clinic reports that hospitalization rates among non-Hispanic Black people and Hispanic or Latino people were both about 4.7 times the rate of non-Hispanic white people. And yet, many people remain reluctant to get the vaccine.

“This is not something you can cram down people’s throats,” McGovern said. “They have to want to do it, they have to see the benefit to them. And I think that only happens [when] the truly vaccine hesitant, they get that personal touch from someone who’s informed, and who can educate them.”

Jonnie Flores was born in El Salvador but grew up in the United States. He is one of the millions of people who came to this country as a child and is a beneficiary of former President Barack Obama’s executive order, Deferred Action for Childhood Arrivals, or DACA. He is a 24-year-old electrician who lives and works in Southampton on Long Island’s South Shore. And he is among the so-called vaccine hesitant.

He’s worked hard at his job for the past three years but has put in even longer hours during the pandemic. “I was actually the only one working for like two weeks,” he said.

“This is not something you can cram down people’s throats… They have to want to do it, they have to see the benefit to them. And I think that only happens [when] the truly vaccine hesitant, they get that personal touch from someone who’s informed, and who can educate them.”

The company Flores works for employs five people, including the owner. At one point, everyone except Flores was sick with COVID-19. But even that wasn’t enough to convince him to get the vaccine. He is skeptical about the efficacy rates and would rather wait to get it.

“If I see that it’s actually curing people or stopping people from getting it, spreading it, then I guess I would trust it,” he said.

“We make sure to educate others on the scientific information, history, and relevant facts of the COVID-19 virus and the efforts that have been done by federal and local government officials,” he said.

Minueza said health literacy among minority communities must be fostered. “When we provide information about any efforts related to COVID-19, we also make sure to include a Spanish version of this information so that both English and Spanish speakers are able to access it,” he said.

When all New Yorkers over the age of 16 became eligible to be vaccinated, Stony Brook made the vaccine available to students on campus with a pop-up POD located in the newly refurbished Student Union. Now, the Pfizer vaccine has full approval from the United States Food and Drug Administrator for everyone 12 and older.

“I don’t know how many people our age are willing and wanting to take a vaccine,” Britanie Carlozzi, a senior business management major, said at the time. “Even if they vaccinate half the people, I don’t know if they should mandate a vaccine or if that’s overstepping.” Carlozzi was awaiting her second dose of the Pfizer-BioNTech vaccine.

In addition to these pop-up PODs, Stony Brook also ran two New York State mass vaccination sites, where walk-ins were accepted. One was at the university’s Research and Development Park and another was located on the East End of Long Island at Southampton University. The Southampton site opened in March 2020 and closed this summer after the staff put shots in about 30,000 arms. Another 20,000 vaccines were administered by Stony Brook Medicine through PODs at Southampton Hospital and Eastern Long Island Hospital

She explained that at first, the mass vaccination site only offered appointments for the first dose of the Pfizer vaccine so the staff could get acclimated. By the time those same patients were scheduled to come back three weeks later for their second doses, she said the staff had become so efficient, they were able to offer both first and second dose appointments at the same time.

Although it was staffed by Stony Brook Medicine, the mass vaccination site was a collaborative effort with the state departments of health and environmental conservation as well as the office of military and naval affairs.

But Walsh-Feeks pointed out that the community was always central to the success of the effort. “Our team from Southampton, they live and breathe this community,” she said.

Colorful cards and notes from people in the community were displayed on a wall at the exit of the Southampton site. They thanked the staff and volunteers from Stony Brook Medicine for their efforts against a deadly virus. These messages of gratitude speak to a time that will not soon be forgotten.

Melissa Azofeifa graduated in 2021 with a bachelor’s degree in journalism from Stony Brook University’s School of Communication and Journalism. She started as a contributing writer for The Statesman in her sophomore year and worked her way up to managing editor in her senior year, which turned out to be one of the most challenging times in the publication’s long history because of the COVID-19 pandemic. Both the newspaper and Melissa persevered.