Sarah Beckford is a senior journalism major with minors in filmmaking, and music and technology. She is cultures & features editor for The Stony Brook Press, and will serve as vice president of the Black Student Union in the 2021-2022 academic year. She loves to write about all things music, arts and culture. You can find her on Twitter @SarahBeckford5. 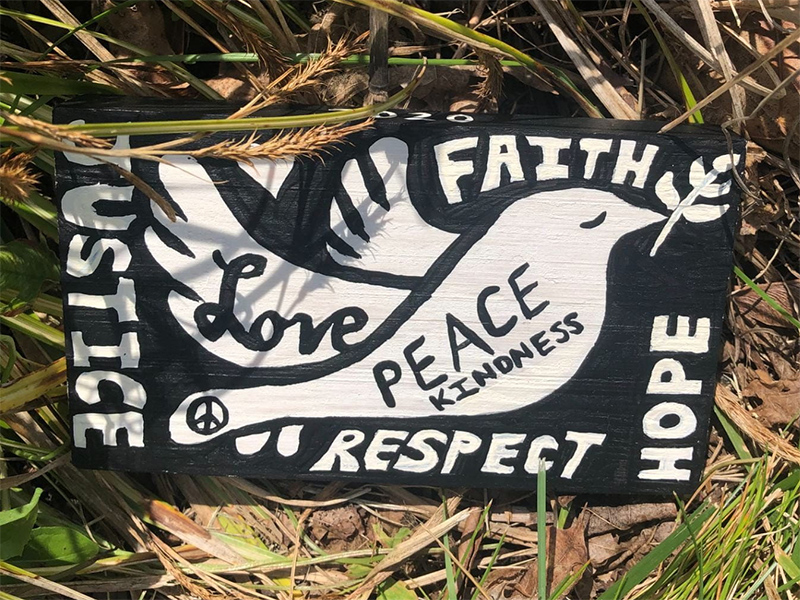 Though museums across the country were shut down and slowly have started to reopen, Stony Brook University’s Paul W. Zuccaire Gallery found a way to keep students engaged in the arts. During February, 2021, the gallery ran an exhibit entitled “Reckoning”, which featured student and faculty art that explored mental health, the pandemic, and social injustice.

It featured art from 16 different majors – 60 pieces of work in all –  and was curated by Karen Levitov, the gallery’s director. All the students worked on their pieces at home, and all the work was placed in a digital exhibition, then moved in person to the 5,000-square-foot gallery on the first floor of the Staller Center for the Arts.

For students like Gillian Parker, who is studying studio art as well as art history and criticism, undertaking the artistic process at home was an adjustment. Parker and other students still have pieces in the studios on campus, untouched works of art that are practically frozen in time due to the abrupt shutdown caused by the pandemic. Parker had to juggle being an artist, student, and parent during this time. Her piece for the exhibit – a video titled “As Time Goes By” – was creative release and a departure from her usual medium of sculpture. It features two dancers in hazmat suits who waltz to the tune of a music box before lying peacefully on the asphalt. The piece was meant to examine the human condition, while also spotlighting jobs that had been affected by the pandemic.

“When I made the work, I think I made it in September or October,” Parker said. “At that point, there had been a lot of death in New York. We had had that first wave, we’d gotten through the summer, and it was just one of those interesting aspects where there was so much chaos, but there were good things  happening too.”

The music box in the video provided more than just a soundtrack – Parker inscribed tally marks on it to show the days since the pandemic hit the United States.

Some students focused their art on social justice, and examined the Black Lives Matter movement, racism, and other political issues. Alumnae Priscilla Nash’s piece, entitled ‘Enough is Enough,’ was a collage of pictures of moments from various protests during civil rights movements that she felt still occur today. She assembled the photos, then painted the words, ‘Enough is Enough,’ in bright red paint, and took it to her first protest. The piece was made as her response to seeing police brutality on social media.

In going to the protest, Nash was frightened at first, but comforted by the community of people who were there to express how they felt.

“Going into it, I was terrified truly, there were actually thoughts in my head like ‘I may get arrested, I may get seriously injured, I may die going to this protest’, so I was preparing myself for all of those things,” she said. “But when I got there I was overwhelmed with this sense of unity and love from the other protesters – wow there is maybe hope out there, there is joy out there, there are people out there who care about this as much as I care about this. So I think that was something that was lacking from the social media perspective, was that positivity, the yearning for change that so many people felt.”

The pandemic also forced classes online, putting many classes and events on hold. The last live musical event held on campus was a duo piano recital on March 8, 2020, featuring Tina Dahl and Gil Kalish, both professors of piano in the music department. In the week leading up to the concert, Kalish had rehearsals for both the duo piano recital, and another with Lincoln Center’s Chamber Music Society at Tully Hall. Both concerts were the same day. The concert at Stony Brook went well, and he recalls having a friendly audience. As for the one in the city, which occurred earlier in the day, Kalish recalls it going well, with a full house of about 1,500 people. But he said there was a sense of caution at the Tully Hall show.

Three nights earlier, the two professors had performed a compilation of pieces by 20th century French composer, Claude Debussy. And not long after the Stony Brook concert, the campus was shut down. Kalish has not been to campus since then. He’d never heard of Zoom when online classes were introduced, and along with the rest of the music department, reckoned with how to teach performance through a screen.

“How do you teach somebody on Zoom? When you teach piano, it’s very intimate. You touch people’s hands, your wrists, your shoulders are up, you go over, and then you also demonstrate,” he said.

Teaching piano and other music courses over Zoom became a challenge, but the music department was able to provide keyboards to students to practice with. Kalish believes they were a great help.

“And so it’s a learning process, and we’ve been on Zoom ever since,” he said. “And the surprising thing is that after that early awkwardness about it you realize, ‘Okay, this is an interesting challenge.’”

Despite these circumstances, the artists remain hopeful about the future, and the Zuccaire Gallery has continued to display faculty and student work from the studio art department.

“I think all of the arts, especially the performing arts – it’s been difficult because going to a museum, going to a theater, listening to a concert, are things that are usually considered social aspects,” Karen Levitov said. “And it’s been very much a challenge in the arts to create meaningful content, but I think that a lot of museums, theaters, and individuals have put a lot of their work online and made it accessible, which has been a good thing that has come out of the pandemic.”

Sarah Beckford is a senior journalism major with minors in filmmaking, and music and technology. She is cultures & features editor for The Stony Brook Press, and will serve as vice president of the Black Student Union in the 2021-2022 academic year. She loves to write about all things music, arts and culture. You can find her on Twitter @SarahBeckford5.