Irini Orihuela graduated from Stony Brook University with a bachelor's degree in journalism in May 2021. 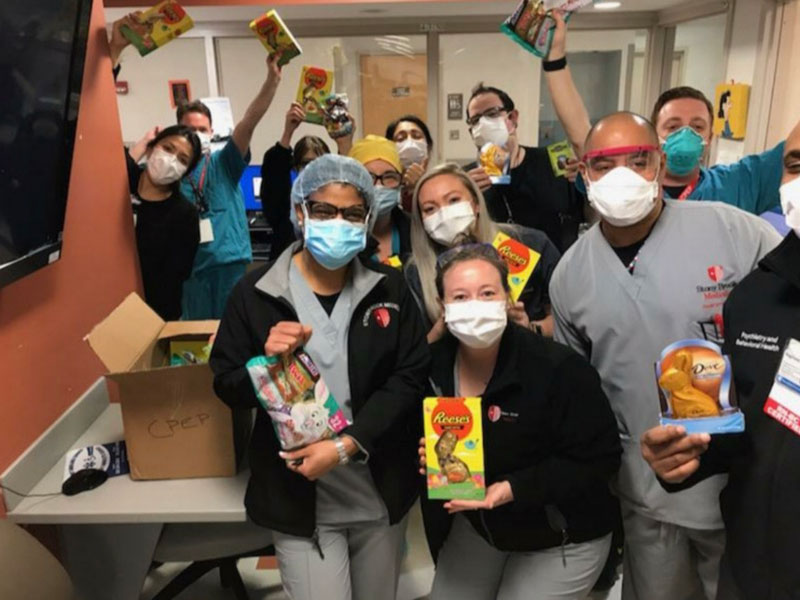 Gloria Caponga has been an emergency room nurse at Stony Brook University Hospital for almost four years. She’ll never forget the year 2020 but through all the long, difficult hours of treating COVID patients, the thing she found most astonishing was the kindness of strangers.

Notes and drawings from school children, flowers and plants from a family of gardeners, lunches and snacks from friends of the hospital – even Chapsticks. People Gloria Caponga and her colleagues didn’t know and would probably never meet. Just people out there who cared and were reaching out to say so, which Caponga said “was the best feeling in the world.”

At the height of the pandemic last year, the outpouring of support from the community was a counter balance to the bleak realities of the coronavirus.

“When not just the food but adorable cards, protein bars, nice things like Chapstick and hand lotions – when all of that was being delivered, we were semi-shocked because to us we were just doing our jobs,” she said.

“But, it was so helpful to be able to grab something to eat that was delivered to work and not having to worry about doing it when you got home,” she continued, “especially because so much extra time was going into decontaminating ourselves once we got home.”

In addition to food and amenities like hand lotion and lip balm, donations of personal protective equipment (PPE) poured into the hospital – even though shortages of masks, gloves and gowns weren’t a problem like at other hospitals, where medical workers resorted to wearing trash bags to protect themselves against the virus.

Still, wearing PPE for hours at a time took its toll. Capogna remembers goggles were hard to see through and some people complained their cheeks felt raw and the bridges of their noses were bleeding because the masks irritated them. Even in the best conditions, the heavy weight of worry and having to be on guard constantly were hard to bear.

Stony Brook mathematics professor, Xiuxiong Chen, was one of the people in the campus community who stepped up. “When I was contacted by several of my former students about sending me masks for my family’s personal use, I initially declined their kind offers. But quickly I realized that we could expand their efforts to help the community.”

So together with several friends and former students, he raised funds to purchase masks. “This is really a manifestation of the values instilled in our students through teachings and examples of the faculty at the math department and SCGP,” he said, referring to the Simons Center for Geometry and Physics, “and the entire university.”

Chen worked with fellow professors Yao Chengjian and Wang Bing to get the PPE here. The students who contacted Chen were from overseas, making it hard to transport the equipment quickly and securely. The Provost’s Office helped distribute the items.

As director of University Community Relations, it is Joan Dickinson’s job to help organize community efforts to support the university and hospital. During the spring and summer of 2020, people “started randomly showing up on campus with things to donate, particularly PPE,” she said. “There was a need for masks, and people had access to that, because maybe they owned a nail salon.”

More than 800,000 pieces of PPE were donated to the hospital – not to mention 450 iPads from individuals and businesses. Doctors were able to conduct telehealth visits with the donated iPads, which reduced the number of people coming to the hospital as well as how much PPE was being used.

“For people who couldn’t leave their house, or didn’t have the money to donate, for them we accepted video messages,” Dickinson said. “I said, ‘Take your cell phone, look at it, and just say ‘thank you for what you’re doing.’” She ended up receiving hundreds of video messages from school children to grandparents who wanted the staff to know they were appreciated and to keep up the good work.

And when calls about food donations started coming in, she worked with the hospital catering company to use the Meal Train website to organize donations.

Kevin Daly, the hospital’s catering manager, started the Stony Brook Meal Train website so people could choose the meals they wanted to send and the restaurants they wanted to order from. Donors could also choose the delivery time, the number of meals, and what unit the food would go to. The person donating would drop the meals off at the main entrance where Daly would meet them.

“At first I was getting phone calls and emails saying, ‘What can I do to help?’” Daly said. “Setting up this website made it easier for all parties involved, and to facilitate how we can get these donations to the health care workers. … They tell me what a boost it is in morale.”

In the summer of 2020, when donations stopped, the website was shut down. But when the second wave of the virus picked up in November, so did the website.

The staff of the university’s Office of Economic Development was among the donors. “We were at an executive meeting one morning and everybody said, ‘Hey, what can we do?’” recalled Kathleen Ferrell, associate director of industry outreach and special programs. Several staffers have relatives who work at the hospital, and they wanted to give back.  “It was a no-brainer,” she said.

They raised about $1,000 and donated in the form of food from a nearby restaurant called Bliss, which ended up donating an additional $500. Ferrell said the food they donated went to both the night and day shifts. She and her team later donated more than $2,000 to Island Harvest, a Long Island food bank.

If one thing was missing during the dark days of the pandemic, it was time to stop and smell the flowers. At Borella Nursery, a 63-year-old family-run wholesale greenhouse business in Nesconset, beautiful flowers were abundant but customers were not. Like many nurseries, the business was struggling because of COVID. But instead of throwing away all the daffodils, Easter lilies and other plants grown on their four-acre property, owners Carylon and James Borella, and their son, Mike, donated colorful spring flowers to Stony Brook Hospital as well as to churches and other local hospitals.

“They are given all of this protective gear and food … But when you give somebody a beautiful flower it just makes their heart smile,” Carylon said.

The hospital staff sent letters of gratitude, but Carylon said the smiles on the faces of medical workers in the neurology department was thanks enough.

“We help as much as we can because this is our community, this is where we live,” she said. “Our sign said this – ‘Have faith not fear, this is what hope looks like.’”

And even though the donations have come in waves just like the pandemic itself, the memories of these acts of generosity and kindness in a dark time endure. “We weren’t heroes,” Gloria Caponga said. “We were just nurses – working, taking care of patients.”

Irini Orihuela graduated from Stony Brook University with a bachelor’s degree in journalism in May 2021.